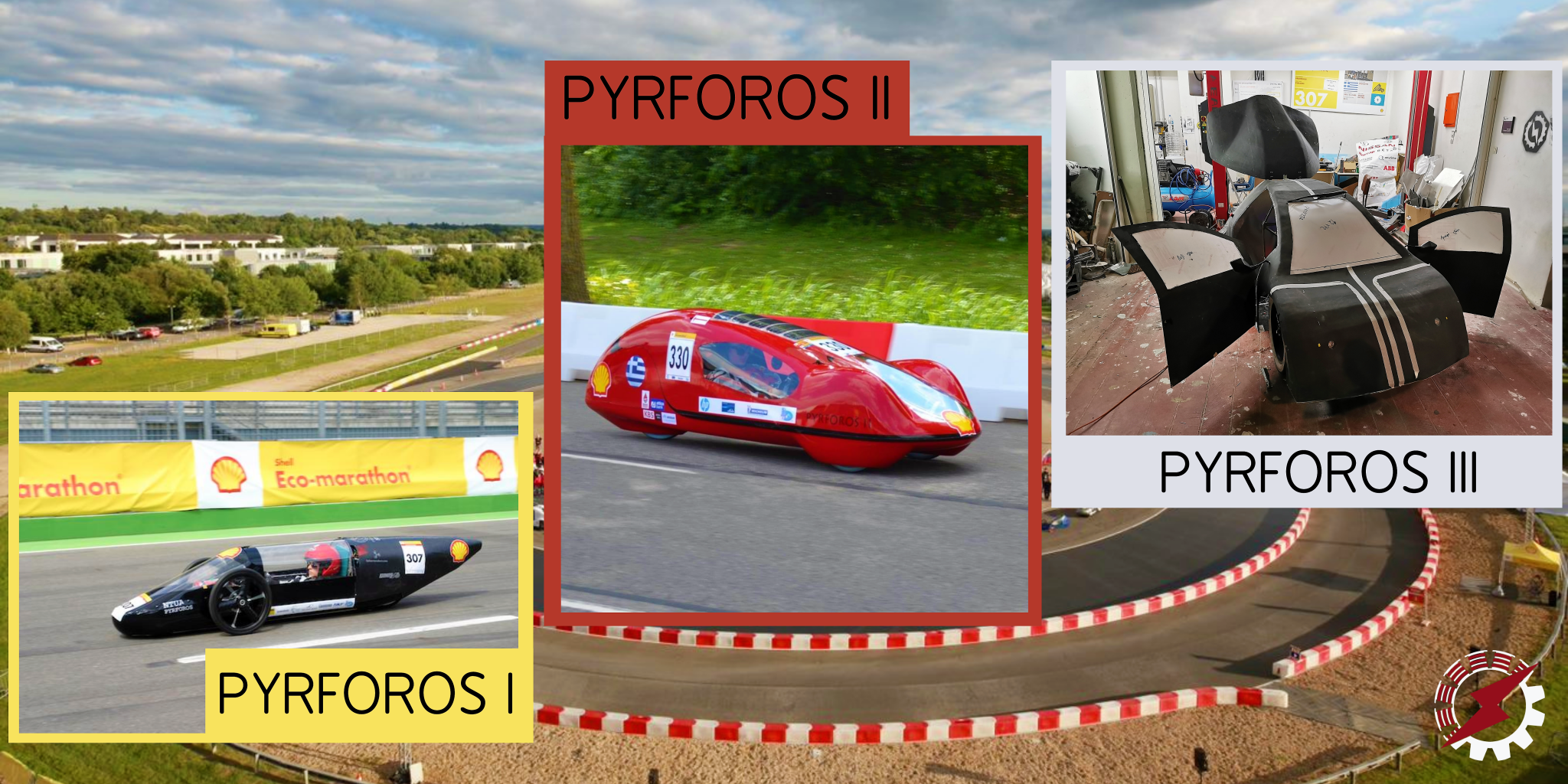 The steady course of fifteen years of the research in the field of electrification, the volunteer-group “Prometheus” , is highlighted through international distinctions in the fields of research, innovation, ecological behavior and team spirit.
The historical path of the team was mainly shaped by two entirely self-built single-seaters: Pyrphoros I (2008-2013) and Pyrphoros II (2014-2022). Continuous vehicle upgrades from solar to hydrogen technologies and then to pure battery electric propulsion have enabled applied innovation at both the undergraduate and academic levels.

2021-22 is shaping up to be a disruptive and creative year. Our goal this year was our participation in the upgraded “city vehicle” category which would offer us the possibility of applying new innovations and technologies.
The starting point was the year 2021, in which, alongside the actions of our team in the competition (through the single-seater Pyrforos II), the design of our new city vehicle also began.

To Begin with, the end of 2020-2021 winning the first place in the Shell Eco Marathon 2021 International Competition online knowledge quiz, our team has feverishly started to work on the Shell Eco Marathon 2022 competition.
Continuing teams tradition of fully in-house construction of the new electric urban concept vehicle, the team has been strengthened with individual electrical and mechanical subteams. The precise and detailed design of corresponding subsystems of the vehicle was the initial goal.

The design process of each subsystem was followed by its construction. Any bugs and deviations from the target were followed by successful fixes for this year’s version of our vehicle. The process of modifying the designs based on possible imperfections was completed when the respective subsystem in practice performed all of its original design objectives.
Construction goals

Electronic boards
The design of the steering wheel board was made with the aim of serving “smart” functions on the one hand (e.g. IR sensors – driving safety) and on the other a display screen of vehicle data.

Therefore, the first concern was the design and development of software for sending data from the vehicle to the base, as well as their real-time graphical representation. The real-time representation is made through a steering wheel with an integrated screen providing useful and necessary information to the driver such as: speed, temperature, distance, remaining energy and consumption.

Then the board of temperature, GPS and accelerometer sensors was designed, while foreseeing the possibility of expansion. In this way, the ability to directly control and support both the driver and the vehicle is given.

The dominant subsystem of electric vehicles is the energy accumulator or commonly known as the battery. In our prototype vehicle, sizing the battery characteristics led us to the relatively new but almost established technology of Li-Ion batteries. More specifically, the dimensioning was done through a detailed simulation of the vehicle’s requirements on the track of this year’s competition.

Our battery consists of 13 21700 type Lithium Ion cells rated at 3.7V/cell 4000mAh. The cell interconnection method is 13s (series). The macroscopic characteristics of the battery are 48V (maximum 54.6V) with a storage capacity of 192 Wh. The battery cells are protected through a special charge/discharge control circuit (Battery Management System). An important factor in the safe operation of the battery is the continuous control of the temperature of each cell and the possibility of stopping its operation in the event of an error.

Electric Motor – Drive system
In the model vehicle of the “city vehicle” category, the propulsion system was chosen to consist of a three-phase synchronous surface permanent magnet motor (PMSM) with a gear ratio of 1:1. The choice of the drive system was made after analyzing the sensitivity of the parameters, in various combinations of engines and transmission ratios.

The final manufactured version of the motor includes 8 poles and distributed single layer windings, with a rated rotation speed of 450 rpm. Its nominal power is ~ 500W and it has the possibility of large overloads for starting the vehicle on hills, etc. The following photo shows the winding of the stator as well as the final form of the motor.

The construction of the engine in various “phases”

Chassis & Supports
The frame (Chassis) of our new vehicle was a mechanical challenge. After careful consideration, the engineering sub-group achieved and confirmed the chassis design objective after a dummy was first constructed and measured for mechanical stress. An important stage was the design of the Roll-Bar as it is an essential factor in the safety of the driver in the event of an accident.

From engineering design to manufacturing
Individual procedures to minimize weight and maximize mechanical strength were the design and manufacture of special support components for both the wheel and engine systems.

In the following image, the strength engineering simulations (FEA) can be seen on the left, while on the right, the final components used in our vehicle can be seen.

Engine and wheel mounts
Draft and final designs of systems not requiring mechanical strength were made by team members on our 3D printer (eg 3D Steering Wheel).

Shell of vehicle
The personality and appearance of the vehicle is ensured through the shell. The competition’s requirement for robust construction, reduced weight and time pressure led to the selection of the pioneering carbon fiber technology. This technology is characterized by reliability and high durability compared to the required weight. The aerodynamic behavior of the vehicle, its aesthetics and space requirements were guidelines for the final configuration of the shell.

The shell of the vehicle is made of carbon fiber

Total Vehicle Assembly
In the final assembly of the vehicle all the individual sub-systems were properly attached to the vehicle chassis and shell, while at the same time the interactions between them were made functional!

At this point we would like to emphasize that our goal is the complete training and ability to create all subsystems by the research team itself.

We’ll be back soon and bring you images of our urban vehicle on the proving ground along with the name of the new vehicle.

With the aim of the smooth process of building the vehicle and the continuation of the visions that govern our team, it was deemed necessary to staff it with new members. For this purpose, in January, we sent an open invitation for those interested to participate. At the same time, we also organized the first open-lab at the Electric Machines and Power Electronics Laboratory, so that the students who wish to join our team can get to know the areas in which it operates and solve all their questions.

The construction of our urban vehicle did not prevent us from participating at the beginning of January together with many distinguished companies in the “Official Opening” of the EBEC Athens 2022 (European BEST Engineering Competition). The EBEC competition is the largest pan-European engineering competition by students for students in the fields of “TeamDesign” and “CaseStudy”

SFHMMY 13
In parallel with the construction of the vehicle, we also exhibited our work. On the third weekend of April, we participated in the “13th Conference of Electrical and Computer Engineering Students – SFHMMY 13” at the University of Patras presenting a workshop entitled “Embedded AI: application in real-time electricmotor predictive maintenance” with leaders, members of Motor Control. In this specific workshop, the participants implemented a system to maintain the safety of the driver of a city vehicle and specifically to predict the maintenance of the vehicle’s electric motor.

From our participation in SFHMMY 13
Collaborations within NTUA
In this year’s activity of our group, a decisive role was played by the direct or indirect cooperation with the corresponding student groups of our university institution that always aim to create pioneering projects and technologies.

On behalf of the volunteer-student group